Like a locomotive, Jimmie Rodgers came into this world with a force that is still strong
over one hundred years later.  And like the trains that crisscrossed the country, Jimmie
Rodgers’ legacy crosses over every aspect of the American music scene.  His music
echoes in  tunes we hear today as his memory is enshrined in the Rock and Roll Hall of
Fame, Blues, Songwriter, and the Country Music Hall of Fames, where on his plaque it
states, “The Man That Started It All.”   Known as “The Father of Country Music”, he has

garnished the W.C. Handy Blues Award and the Lifetime Achievement Grammy Award
in 2017.  No other entertainer or band in history can list these accomplishments
garnished by "The Singing Brakeman".

The Jimmie Rodgers Saga will follow the musical trail blazed by this pioneer of the
entertainment business.  From the Minstrel and Medicine Shows of yesteryear, which
traveled the roads by wagon to Bob Dylan’s Tribute to Jimmie Rodgers’ by way of the
Internet—Jimmie’s presence is a legacy.  In the liner notes of  THE SONGS OF JIM-
MIE RODGERS: A TRIBUTE, Dylan says, “Jimmie Rodgers of course is one of the
guiding lights of the 20th Century whose way with song has always been an inspiration
to those of us who've followed the path. A blazing star whose sound was and remains
the raw essence of individuality in a sea of conformity, par excellence with no equal”.

Born September 8, 1897, it is a time when Annie Oakley and Sitting Bull traveled with
Buffalo Bill Cody’s Wild West Show, and trains, nearing 80 miles an hour began to con-
nect the western territories with the populous eastern cities.  Moving faster than the train,
the technological  inventions of the day such as the phonograph (talking machines), the
radio (the wireless), and the big silver screen (flickers and talkies) would not only spur
along Jimmie Rodgers’ career, but would give rise to the Entertainment Industry itself.
James Charles Rodgers was 3 years old when the century became nineteen hundred.
Three years later his mother would die, and the Wright Brothers flew at Kitty Hawk.

As the new century began there was only ten miles of pavement in the country, oil was
discovered in Texas and U.S. Steel Corp. was formed.  Gibson began to make guitars
and the first movie with a plot, “The Great Train Robbery” is released. At 13 years of age
Jimmie Rodgers joined a Medicine Show.  “Memphis Blues” had just become the first
blues song written down and published, and Irving Berlin’s “Alexander’s Rag Time Band”
was the popular tune.  We will see how the years Jimmie spent in the south playing
music on the railroads, with ex-slaves and hobos effected the course of his music...

The year 1927, would become a big year in the life of Jimmie Rodgers.  It'd become
the year that he would make his first recording being discovered by Ralph Peer who
had gone to Bristol Tennessee to record some of the new “race music”, also being
called “hillbilly music”. August 4th became a historic day in the history of music in this
country when Mr. Rodgers first recorded, two days prior The Carter Family did their first
recording.  Also, that year we saw sound brought to the movies with the release of "The
Jazz Singer."  Sound had come to film and Jimmie found out he had tuberculosis.

Soon Jimmie’s “T For Texas” sells over a million copies—a blockbuster even by today's
standards.  In 1930, he goes to Hollywood and records with Louie Armstrong in a studio
that in the 1950tys Elvis would record many of his big hits.  The next year Columbia
Pictures teams up with RCA and record a 3 song "short" as one of their early ventures
into the "talkies", and what might be one of the early music videos, and you could say
the beginning of Sony.

The 1930’s bring the Great Depression and Jimmie has hit a chord with the common man,

even against the odds of times he rises to heights known by no entertainer before him,

many agree say became the first record and radio superstar.  After which he wound be

one of the top vaudeville acts in the United States.

Jimmie Rodgers’ final years came all to quickly.  He spends them in the Texas Hill Country

becoming an honorary Texas Ranger and touring with Will Rogers.  The cowboy life in

Texas begins to influence his music,  and his disease is taking him further away from his

stardom.  In 1933 this young troubadour passes away at thirty-six in a lonely hotel room

His legend only grows.  We will explore the innovative styles in music that he inspired
from Gene Autry to Tanya Tucker, from Earnest Tubb to Jerry Lee Lewis, from Jerry
Garcia to Bob Dylan Merle Haggard and Willie Nelson...virtually everybody was
influenced by Jimmie


The JIMMIE RODGERS SAGA is about a man and his musical influence, it'sabout a railroad man with TB during the Great Depression and his dream. 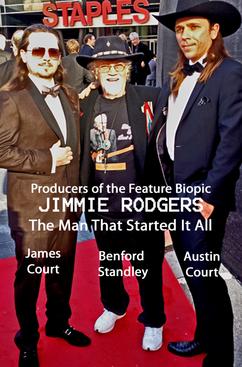 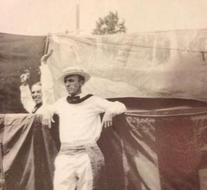 Singer, songwriter, rancher, horseman, and the

"As Hank Williams later put it, "You've got to have smelt a lot of mule manure before you can sing like a hillbilly."  Anyone who has heard Jimmie Rodgers sing "TB Blues" or "Lullaby Yodel" or "My Old Pal" will immediately recognize that Rodgers had lived, what he sang, had suffered the pain and anguish, had gone through it in the most metaphysical sense, as Ishmael penetrated the whiteness of the whale and survived to translate it into a statement of common faith, some resonant, soothing litany, beyond mere words but instantly perceived, shared, understood...Jimmie said, "I guess you got no business with the blues unless you can sing 'em."

from JIMMIE RODGERS by Nolan Porterfield 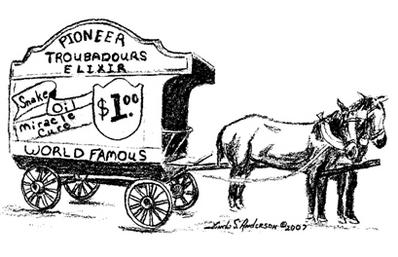 "Soon after, he ran away from home with a medicine show, having convinced the management, based on his amateur "experience," that he was a professional performer.  He was already buy picking up ample numbers of girlfriends as a traveling showman, but also found time to pick up several stringed instruments; strumming mandolin and banjo in particular and, only secondarily, guitar.  At  that point, with the attractions of the show business life so clear to him, his father announced that Jimmie would be coming along with him to learn a legitimate, less frivolous trade, the rail tending section crew work that he supervised.  Jimmie's show business efforts were mostly put aside for the time being."